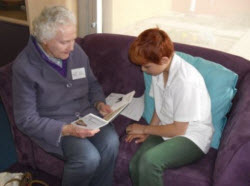 This program was formally launched in Canberra in 2005 by HE Major General Michael Jeffery, Governor General of the Commonwealth of Australia. Its aim is to assist children to gain the maximum value from the educational process, enhance community involvement in our local schools and add value and purpose to the lives of participating volunteers. Its slogan is an ancient African proverb, ‘It takes a village to raise a child’.

When I saw the notice in the U3A Newsletter calling for volunteers for SVPACT, I was a little hesitant about applying as it is many years since I left school at a primary and secondary level. However, after a chat with coordinator, Mal Ferguson and attending several orientation sessions, I was more at ease.

After volunteers have been screened and accepted and attended the above sessions, pupils are allocated to volunteers. Preferences as to gender, age and proximity of the school to one’s residence are taken into consideration. The idea is that just one hour each week of giving a child your undivided attention can pay huge dividends. It also has the bonus of building bridges between generations.

I spent my first year with my student at one school and then followed her when she started school in another suburb.

There is a Code of Conduct to be observed by volunteers and good guidelines are given regarding qualifications and skills. Patience, empathy, and life experience and good listening skills are emphasised, but formal qualifications are not obligatory.

Having left school in the era of no talking in class, sitting quietly at desks and of corporal punishment (yes, it was accepted then!), it was a shock to see a much more informal and flexible system. Discussion and analysis while working in a team is acceptable. One good practice I have noticed is the ‘fruit break’ at 11 am, when each child brings a piece of fruit instead of the sticky play lunch I remember. The obligatory sun hats worn out-doors is another healthy innovation.

I’ve learned a lot about how the younger generation approaches life today and I hope my student has learned something of value from me.

It has been a rewarding and enlightening experience and I hope other U3A members will consider joining this very worthwhile program. Mal Ferguson (secretary@svpact.org.au; Phone 0405732837) will be pleased to provide more information. — Joy Wheatley